Home / Tech / Another camera: The Samsung A9 has four 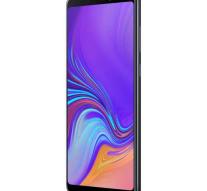 amsterdam - It goes with cameras on mobile phones the same way as with razor blades. When the one (Huawei) with three cameras comes on the back, the next one (Samsung) just stops four in its next model. For an even smoother result.

Cameras are what it's all about in smartphones, and that's exactly why the Samsungs A9, the new flagship in its A-series, does not have 1, not 2, not 3, but 4 cameras at a glance. 'Social media are central to millennials, the target group we focus on with this phone,' says Gerben van Walt Meijer, Marketing Manager Mobile at Samsung Netherlands during a brief presentation of the telephone for Dutch journalists. 'You see it on the rise of Instagram. People want to photograph, share and especially miss nothing. If we look at which hashtags are used the most, are travel and nightlife. That is also the idea behind this camera. '

The device has resulted in a special 120-degree wide-angle lens for landscape images, a separate camera for a nice dramatic bokeh effect (the blurred background behind a portrait photo), a main camera with 24 megapixel that excels in the tradition of Samsung under dark lighting conditions and a remote copy, which can bring an object closer by an optical zoom.

For the A9, which comes out in November, Samsung comes this month with the previously announced A7, a new cheaper model in the middle class line that is the A-series, which like the A9 has a beautiful glass housing. It does it without the telephoto lens and thus bears three camera lenses on its back. Also the phones in the cheapest segment have recently been renewed with the plastic-covered J4 + and the J6 + which also see the light this month. The J4 + has on its back a 13 megapixel camera on the back, the J6 + puts a 5 megapixel camera next to it to bring extra depth in photos.