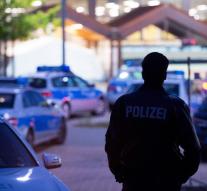 - In an asylum centers in Braunschweig, Germany on Tuesday evening was a big brawl. About three hundred refugees were facing each other . There was disagreement between Algerians and Syrians about stolen goods . No one was injured. The police made ​​an arrest.

It was the second big brawl in a German asylum reception Tuesday . Earlier in the evening it was also wrong in Hamburg. There were about sixty refugees together on the fist.

There were , inter alia, iron rods used to store in each other. Five people were injured. Last week was in another hostel in Hamburg even though a mass brawl .