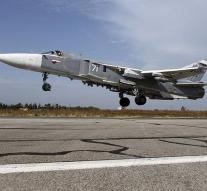 - Russian elections last Sunday gave a view of the likely number of Russian troops in Syria. The Kremlin does that number secret, but the Russian newspaper RBK calculated on the basis of Russian voters in Syria that there should be at least 4,000 troops. That's more than hitherto suspected. Writes the German weekly Der Spiegel.

The publication of the results of the elections show that 4751 Russians in Syria voted. That's four times as many Russian voters as five years ago. Russia seizes military since September 2015 in the civil war in Syria.