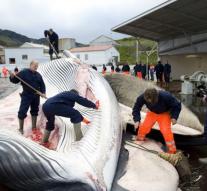 - Activist collective Anonymous hackers claim responsibility for the downing of five government websites in Iceland protest against whaling by this country. The sites, including the official website of the Prime Minister and the Ministries of Environment and Interior, were flat Friday and remained offline until Saturday afternoon.

In a video posted on social media, activists called on everyone to hack websites linked to Iceland to protest the continued commercial whaling despite international moratorium.

Iceland is a member of the International Whaling Commission (IWC), an intergovernmental body that prohibits commercial fishing rod since 1986. But both Iceland and Norway continue to hunt whales.