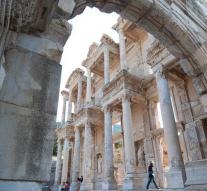 - Austrian archaeologists can no longer dig in the ancient Turkish city of Ephesus. The Turkish government, the investigation ended prematurely because of,, continuing political tensions with Austria ', the Turkish newspaper Hurriyet reported.

The Austrian Institute of Archaeology doing for over a century excavations in Ephesus. The western Turkish city on the World Heritage List of UNESCO and hosted once one of the Seven Wonders of the World, the temple of the Greek goddess Artemis. However, the site is now,, adopted 'by the local museum. If not improve relations between Ankara and Vienna, the Austrians can write a license for next year on their bellies, message Hürriyet.

Austria wants to suspend negotiations on Turkey's accession to the European Union and therefore has angered Ankara.