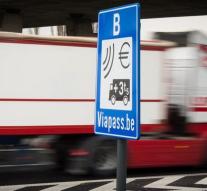 - In the French speaking part of Belgium have truck drivers with their trucks Thursday night blocked roads in protest against the introduction of a kilometer tax for heavy goods vehicles over 3.5 tonnes. According to one of the initiators of the action, Fabrice Ausloos be,, roads blocked at least until Friday morning. '

It is apparent from the data traffic of the public broadcaster RTBF there are no blockades on major highways. It would go on to secondary roads and slip roads from highways to include Courcelles, northwest of Charleroi, Herstal, between Maastricht and Liege and at Villers-le-Bouillet north of Huy (Huy).