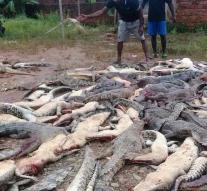 jakarta - Furious villagers killed almost three hundred crocodiles in Indonesian West Papua. That happened after a 48-year-old man was bitten by one of the reptiles.

The man had died on a crocodile farm, where he apparently wanted to pick grass to feed his cattle. 'An employee heard someone calling for help. He quickly went to the scene and saw that a crocodile was attacking someone, 'the authorities report.

News site Detik reports that the emotions were high during the funeral of the dead man. Hundreds of people armed themselves with knives, hammers and tools. They then advanced to the crocodile farm, where, according to the local authorities, they killed 292 animals. Images show that villagers are standing around a pile of dead crocodiles.

The crocodile farm opened its doors in 2013 and was licensed. The damage is estimated at more than 25,000 euros.