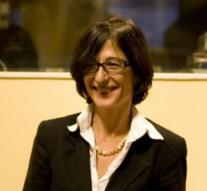 geneva - The prominent jurist Carla del Ponte has said goodbye to the United Nations Human Rights Council. She released her frustrations about the fact that no special tribunal was established to punish war crimes committed in Syria.

Del Ponte announced her departure earlier this year from the commission responsible for investigating war crimes in Syria. She repeated at her farewell to the Human Rights Council to stop frustration. 'Seven years of crimes in Syria and total impunity. That's not acceptable, 'said the former prosecutor.

The jurist forbid the international community and the UN Security Council had not set up a Syrian tribunal. She told a Swiss newspaper last month that there is sufficient evidence to condemn Syrian President Bashar al-Assad for war crimes.

The Syrian Commission of the Human Rights Council has left only two members left by Del Ponte: Karen King AbuZayd and President Paulo Pinheiro. The latter stated that in the end many people should explain 'why they did not act faster to prevent the slaughter. '