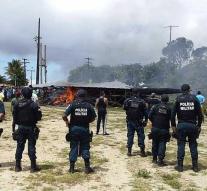 brasilia - Residents of the northern Brazilian city of Pacaraima attacked a refugee camp on Saturday and set it on fire. In the camp about two thousand Venezuelan refugees, many of whom fled back, crossed the border.

Local media report that the attack took place after Venezuelans robbed and wounded a Brazilian merchant earlier in the day. According to the police, there were no injuries during the attack and no arrests were made.

Pacairama, in the northern province of Roraima, lies on the border with Venezuela and on an important route that Venezuelans choose to escape the deep crisis in their own country. In the first half of this year, sixteen thousand Venezuelans have already applied for a residence permit in Roraima.