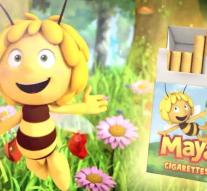 brussels - The creators of Maya the Bee are furious at Greenpeace, which has the little children's heroine promoted in an inimitable film of cigarettes.

In a video that is apparently meant as a parody, the environmental organization has the Studio 100 character Maya the Bee advertise 'honey cigarettes'. 'From now on, children can also enjoy real cigarettes. For small children's hands, with the best tobacco and deliciously soft honey flavor '.

At the end of the video it becomes clear that Greenpeace is behind the production. The 'real' Maya apparently advertises sausage products in Belgium and that does not mean the environmental organization. The meat that is advertised (charcuterie) according to the environmental organization would increase the risk of diseases such as colon cancer, cardiovascular diseases and type 2 diabetes.

Studio 100 can not laugh at the parody. 'We regret this very much. What is the purpose of this? Do children suppose that Maya smokes or simply weeps? says Studio 100 CEO Hans Bourlon in Het Nieuwsblad.

Greenpeace wants Studio 100 to replace the meat with healthy vegetarian alternatives. 'We regret that our figure is misused in this way,' says Hans Bourlon.

'The comparison between eating meat and smoking is also out of proportion,' he continues.

'And why Maya? Maya does not smoke, because that is harmful, carcinogenic. Why a Flemish company and for example not Mickey Mouse? Are they afraid that they will be legally attacked and see all the corners of the room? '

'We have already received a lot of reactions from people who wonder why Maya suddenly smokes? Many children see the video, but can not yet read the text at the end and therefore do not know what Greenpeace really wants to say. What is the logic behind this? Do they want to show the children that Maya smokes or does she just want to be upset? '

According to Bourlon, the cartoon must have cost hundreds of thousands of euros. 'When people think of Greenpeace, they often think of the organization that will save whales. Anyone who donates, however, must also realize that their money goes to such videos, 'said Bourlon.