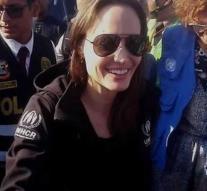 - Actress Angelina Jolie visited a camp with Venezuelan refugees in the Peruvian capital Lima on Tuesday. She did this as a UN ambassador to draw attention to the dire situation in which more than 2.6 million Venezuelans are now displaced.

Venezuela has been suffering from a disastrous economic crisis since 2015. 'These people do not leave their country because they want to,' Jolie said during a meeting with journalists. 'People die because there are too few drugs. Venezuelans are starving. There is violence in the streets every day. These migrants do not want charity, they just want help. '