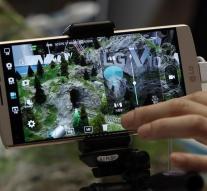 - Android users who found under the Christmas tree a new device during the last holiday season, probably got a phablet. Figures from Yahoo's research firm Flurry revealed that half of all newly sold Android devices phablets.


Phablets, smartphones with a screen diagonal of 5 to 7 inches, are increasingly popular. Where it was previously customary to buy a smartphone and a tablet, now more and more people for a phablet alone.
Moreover, the demand for phablets in Apple-land 'not so visible. Only 12 percent of all sales of iOS devices will be titled 'phablet'. Incidentally, this is also not very surprising since only the iPhone 6 and iPhone 6s Plus Plus with their 5.5 inch screens meet the phablet requirement.
NEW