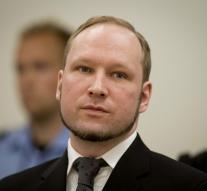 oslo - The Norwegian mass murderer Anders Breivik sues to get lift his isolation in prison. According to him, the harsh conditions of his imprisonment a violation of human rights , his lawyer said Friday .

Breivik killed 77 people four years ago by a bomb attack in Oslo and a shooting on the island of Utoya . Since his arrest he has only had contact with prison staff , his lawyers and his mother, who is deceased two years ago.

His request is dealt with in March. The question is whether Breivik must be personally present at the session .