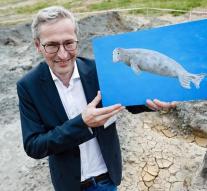 hamburg - Amateur Paleontologists have north of Hamburg made a remarkable discovery. They knew in Groß Pampau get an eleven million years old skeleton of a seal above the ground.

The discovery was made in a gravel pit. Groß Pampau is a known paradise for paleontologists. In the quarry since the last thirty years have been found include skeletons of whales and sharks. The animals reached that area because it belonged at that time still part of the North Sea. The sea covered eleven million years ago, large parts of what is now northern Germany.

The seal was about 1.70 meters long and belonged to a species that does have similarities with the present animals, but as such no longer exists.