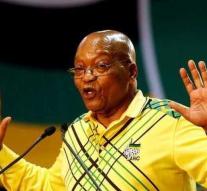 johannesburg - The South African government party ANC has given President Jacob Zuma an ultimatum. He has to leave at the latest on Tuesday, otherwise he will have a deposition procedure in parliament. That news news site news24 based on sources around the party.

According to the medium, Zuma is virtually isolated within the party, which is expected to give a press conference on the issue on Tuesday. The president would have refused to immediately resign. He reportedly asked for a three-month transitional period Monday night, but the party top felt nothing for it.

'Zuma is very emotional,' said an initiate. 'He now speaks from the heart. He is angry. '