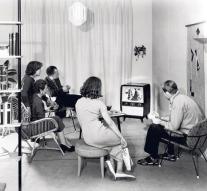 middelburg - Customers from the Zeeland cable company Delta can only watch digital television from next year. The company wants to improve internet capacity and requires space, so Delta announces.

By spring 2018, all customers must have digital television. A major operation will not be that. Now more than 80 percent of Delta customers are no longer watching through analogue television signals. Delta will help customers to transition.

Analogue TV takes on the cable network three to six times as much space as digital TV. This space will be used later for more internet capacity.