Home / World / An overview of the terror night in Paris 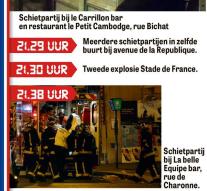 - The City of Light this morning was fearfully awake with the killing of the attacks the evening and night were counted before. The counter is thereby remain stabbing provisionally at 127 fatalities and 180 injuries, of which at least 80 are critical. Moreover, people are still missing. Through Facebook and a dedicated phone trying to get people behind the fate of their loved ones.

The horror story began Friday evening at 21:20 pm with the first of three explosions at the Stade de France where France thereby played a game with bomvesten terrorists blew themselves up. Almost simultaneously there was shooting in a popular neighborhood in the 10th arrondissement near Place de la Republique in restaurants and in bars.

French President Hollande who attend the contest was evacuated, but the match was just played out. The French authorities stated later that the attackers were confined to restaurants in the immediate area because they are deterred by the security measures around the stadium. That the attackers made ​​use of bomvesten has shocked the French. Such attacks were known not yet there.

About 25 minutes after it was hit by the famous Bataclan concert hall where armed men indiscriminately on the approximately 1500 visitors started shooting. The subjects were also taken hostage and was reported within one at which they were executed.

The choice of locations indicates that the terrorist attacks, claimed by IS, focus on the Western way of life. Football and entertainment where people feel relaxed and in some cases, the alcohol flows freely. The aim was to make as many random victims. That is a difference with the attack on the satirical magazine Charlie Hebdo earlier this year. When the action was primarily intended as revenge for cartoons about Mohammed.

As a response to the events was yesterday evening declared a state of emergency in France, border controls tightened and 1 500 additional soldiers called for security. Which arrived at the high number of security guards patrolling since Charlie Hebdo in Paris.

The bombing at the restaurant Le Petit Cambodge were slain by a gunman 12 people. The panic in the narrow streets was great. But nowhere the horror was so great as in the Bataclan theater in which only ended after a storming of special units to the bloodshed among innocent theatergoers. It would be four gunmen. When a French elite unit stormed the venue blew three of the four terrorists on the fourth was shot dead by the troops.

In the morning, Hollande spoke to his people once more to which he spoke of an act of war against France and proclaimed three days of national mourning. Sunday morning was a nervous day in Paris with false reports about an attack in the east of the city. However, many residents were clearly not yield to terror. "This is an attack on our democracy, but I do not steal me," sang a French woman for the French television the opinion of many.