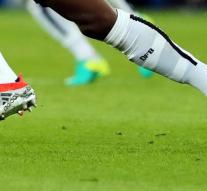 - Of the 26 matches so far played on the European Football Championship, the average Dutch TV viewer saw seven. Per game look some 1.6 million people, according to figures released Monday by the NIS. The match Belgium-Italy with 3.1 million viewers being the most watched match.

Despite the fact that the Dutch team not participating in the European Football Championship, still have many compatriots are some of them. After ten days, nearly 70 percent of all Dutch six years and older (even) look at the event in France. That equates to 10.8 million people.

The opening attracted 2.3 million visitors, slightly less than that did take part (2.6 million) of the previous European Championship when the Netherlands.