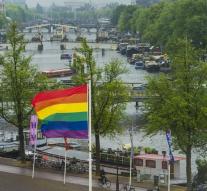 amsterdam - The Amsterdam Maurice Beljaars submitted an application for a rainbow flag emoji. Beljaars made the request after a friend of his had had to deal with anti-gay violence and he wanted about tweeting, he says in Het Parool. '' There are emoji for a head massage and a fried egg. But a rainbow flag, the symbol of LGBT community since the seventies, is still out of the question. '

It was not the first time he missed the rainbow flag on his phone, but he decided to make it work. So Beljaars filed a suit last weekend in paperwork at the Unicode Consortium. '' The request was a chore. The proposal must meet all kinds of rules and you will be asked to describe in detail how small the symbol should look like. ''

Time being it remains to wait because the Unicode Consortium now has two years to decide on his request. If there is a great demand for a certain emoji that can possibly faster.