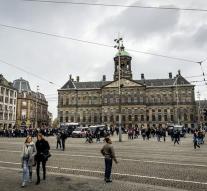 amsterdam - Amsterdam draws a million euros for additional security measures in busy areas in the city. These should limit the risk of terrorist attacks, as can be seen in the budget for 2018 presented by Alderman Udo Kock (Finance).

The City Council recently announced the possibility of investigating possibilities for additional safety measures in places that are well-visited, such as the Kalverstraat. This is because terrorists are increasingly using a vehicle when committing an attack.

In the last budget of the current college of mayor and deputies, further attention is paid to the settlement of the finances for the next city council. Thus, budgeting points are eliminated in the district areas and money is reserved for wage and price increases. In recent years, Kock has had a heavy bump into control of municipal finances, which often fails.

'The city is good,' says the alderman. 'We invest 425 million in the city, the charges for Amsterdammers go down again and we continue to improve city finances. That's a nice result. '

The city council also invests extra, among other things, in reducing the teacher's shortage (1.5 million), public space art (1.8 million) and an international AIDS conference (0.5 million). Previously, it was known that 30 million euros will be available to guide the crowds in the city. The tourist tax also increases, with the percentages in the center higher than those out there.

In this budget, the college is reticent with new policy choices, given the forthcoming municipal elections and the fact that there is no new cabinet yet.