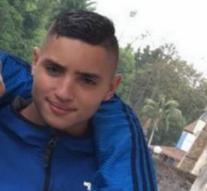 amsterdam - The fatal victim of the shooting in Amsterdam Friday, the 18-year-old Naoufal Mohammadi. He was a regular customer of the shisha at the Ten Kate Street, where he succumbed to his injuries get.

About the young victim's life is not well understood, but friends mourn on social media messages to his death, the Parool reported Monday. The shooting was a result of an out of hand arguing in the street. There'd been shot several times.

Not much is known about the cause of the quarrel. The suspect was arrested Friday night shortly after the shooting, was released. His role in the shooting incident is also examined. According to police, it does not seem to be a reckoning.

Police in Amsterdam is therefore still urgently looking for witnesses to the fatal shooting. There are no incoming tips, police reported Sunday.