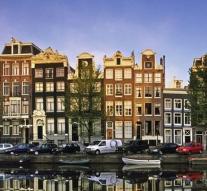 amsterdam - Amsterdam Airbnb and finally signed a new deal to regulate the fast growing rental homes to tourists. So Airbnb ads will automatically start removing landlords who do not abide by the rules.

Confirm that sources in the coalition D66, VVD and SP which alderman Ivens (live) have been dispatched to renew the agreements with Airbnb. Today Councillor presents a new agreement negotiated last year by the website. The property to tourists through Airbnb rental is legal, provided that no more than 60 days per year and no more than four tourists every night. More than 14 000 houses were for rent last year on the site.

But many illegal hoteliers who rent all year by a pledge to use the platform and can be better addressed by the new arrangements. Airbnb will warn landlords as they approach the 60-day limit rental. If a landlord has achieved picked up the property in question Airbnb maximum, thus well-established sources. Landlords who run bed and have breakfast license and 365 days a year, guests must be exempted received.

Illegal advertisers who have been caught by the municipality and fined for violating the rules will be banned at least two years of Airbnb. Airbnb also going to make separate agreements with the major social housing associations in the city.

Airbnb also promises greater amounts of anonymized information to share with the enforcement of the municipality on ads that do not seem to follow the rules. There will also be an opportunity to complain about the noise causing some Airbnb tourists through Airbnb. In the spring of 2015 locks rental site Airbnb and the municipality already a deal that allows the website automatically entail tax went to landlords and pass it to the city treasury. This resulted when 5.5 million euros. This year that amount to more than 8 million, said a source. Ivens also wants to make deals with competitors of Airbnb. The council must still approve the new agreement.