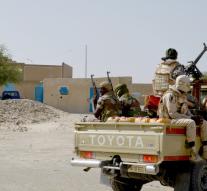 lagos - Amnesty International has accused the Nigerian military of shooting dead at least seventeen members of a separatist action group in the Biafra region. The organization speaks of 'excessive and unnecessary use of force' and calls for research on the government of the African country.

The victims were shot late May, shortly before a planned protest march in the city of Onitsha. According to Amnesty were another fifty people injured by the violence of her army. The organization relies on information from eyewitnesses, hospitals and morgues.

The army denies the allegations and emphatically states that 'self-defense' in total slain five members of a separatist group, after they had attacked premises of security services with firearms and explosives. 'Amnesty lose its credibility,' said a spokesman for the army.

'You should break his jaw '

'Máxima not welcome at topmeeting '