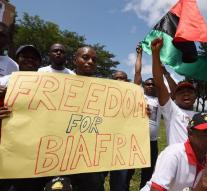 lagos - Amnesty International says security forces of Nigeria are responsible for the deaths of at least 150 protesters in the Biafra region. The army would have shot almost without warning sharply, to disperse demonstrators from the separatist action group Indigenous People of Biafra (IPOB). This would have happened between August 2015 and August 2016.

An army spokesman said that the accusation of Amnesty is one in a long series of accusations, intended to allow the Nigerian army in a bad light. The police denied the allegations and said that the police has no protesters attacked in Nigeria.

Amnesty says that Nigeria has used excessive force to disrupt meetings. The organization draws this conclusion after the 193 people interviewed, and many photos and videos have been studied. The organization calls on the Government of Nigeria to investigate.