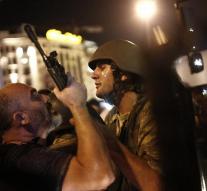 Supporters of President Recep Tayyip Erdogan called for demonstrations against the coup attempt by a section of the armed forces in chants on the death penalty for the putschists. Also from the governing party AKP sounded the call for a debate on capital punishment for the coup plotters.

Prime Minister Binali Yildirim said Saturday in response to questions from journalists that the death penalty has been removed Turkey from the Code. But he added that,, additional measures 'envisaged to avoid such' mad day 'in the future.