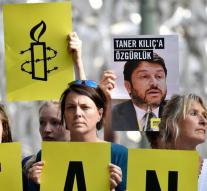 ankara - The director of the Turkish department of Amnesty International will be held temporarily. A Turkish court ruled that Idil Eser may be detained.

Eser was arrested on July 5 together with nine others when she attended a workshop on digital security. They were arrested in the wake of the failed coup last summer and are suspected of joining a terrorist organization. Among the detainees are a Swedish and German trainer. The others are human rights activists.

The court ruled that four detainees should be released.

Amnesty calls the detention of activists a new blow to human rights in Turkey. 'An upsetting insult of justice and a new downturn in the oppression after the coup attempt,' said Amnesty in a reaction Tuesday. According to the organization there is a 'political witch hunt'.