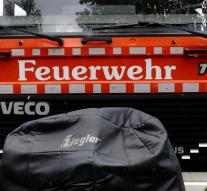 hennef - Presumably because of the heat, a coffin of World War II was flown on Monday in Hennef an der Sieg in western Germany. A collector kept it illegally in a garage.

The fire brigade after a first explosion had to retreat when more explosions followed. Surrounding homes were evacuated and the train traffic stopped over a nearby railway line, while the fire department reminded a distance of the garage completely. Nobody got injured, police said.

A 51-year-old collector has opened an investigation for violation of the arms law.