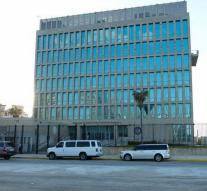 washington - Mysterious 'incidents' have caused at least sixteen Americans who worked for the embassy on Cuba physical complaints. That has confirmed the Foreign Ministry on Thursday after reports in the media about an 'acoustic attack.'

The enigmatic phenomenon has been playing since the end of 2016. Several diplomats or their relatives have left Havana with hearing problems and other symptoms. Some are now assigned to a hearing aid. Cuban doctors also helped. The authorities are not aware of any harm.

CBS revealed last week that Americans and Canadians who worked in Cuba had to go to the doctor for hearing loss, nausea, headache and equilibrium disorders. By and large, mild brain injury and central nervous system damage were detected. Experts try to find out if the diplomatic homes may be polluted with harmful sound waves.

The 'supersonic plague' seems to have ceased. There are no complaints in the past.