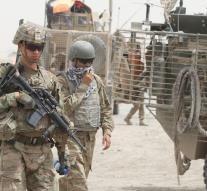 - A large majority of Americans are dissatisfied with the way the United States approaches the fight against terror. This is evident from an opinion poll carried out on behalf of CNN. Nearly three-quarters responded dissatisfied therein.

Most Americans are not convinced that the US can win the war on terror. ' 40 percent say that the terrorists have the upper hand, while another 40 percent think neither side have the advantage. Only 18 percent expect the US and its allies to settle the conflict in their favor.