Home / World / Americans put a total of 96 Russians from 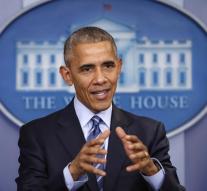 moscow - A total of 96 Russians, the United States put out in retaliation for the alleged involvement of their country in cyber attacks on the Democrats during election time. Departing President Barack Obama announced Thursday that declared 35 Russians 'persona non grata'. The Russian Foreign Ministry pointed out Friday that their relatives have to leave the country.

' We are not only talking about diplomats, but also about their families. In total there are 96 people, including schoolchildren and young children, '' said the spokeswoman for the ministry in Moscow. She suggested that some diplomats be expelled only two months were in the US. ' How can they have been involved in undermining the US election? ''

That US sanctions were announced on the same day as the cease-fire in Syria, that without the US came about on the initiative of Russia and Turkey, the spokeswoman said ' symbolic '. ' It is a kind of revenge for the failure of their foreign policy. ''