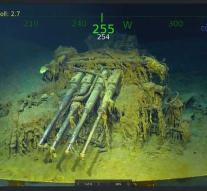 brisbane - In the Coral Sea the wreck was found of the American aircraft carrier USS Lexington. The Lexington foundered on 8 May 1942 during the Battle of the Coral Sea after being hit by several Japanese torpedoes and aircraft bombs.

The wreck lies about 800 kilometers off the Australian east coast, at a depth of 3 kilometers, reports the BBC. It was found by an expedition that was led by Microsoft founder Paul Allen. Last year another Allen expedition found all the wreckage of the cruiser USS Indianapolis, which fled in July 1945 and carried spare parts for the atomic bomb.

The expedition released photos and video images of the Lexington showing the name of the ship and some of the 35 planes that were on board when the ship sank. The Lexington, nicknamed 'Lady Lex', had more than two thousand crewmembers, of whom 216 died. The wreck is considered a war grave and will not be recovered.

The Battle of the Coral Sea lasted from 4 to 8 May and is seen as a turning point in the Japanese advance in the Pacific. It was the first naval battle in history that was exclusively conducted by aircraft carriers. Three Japanese and two American ships took part in the battle.