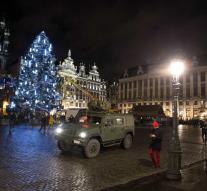 brussels - An American tourist was stabbed in the night of Wednesday to Thursday at the Grand Place in Brussels. Police have arrested three suspects.

According to the Flemish newspaper Het Laatste Nieuws took the stabbing around 01. 30 hours. The American stood with three friends to admire the Christmas decorations on the Grote Markt. They were approached by three men who meelokte one of the women. The American wanted to bring her back after some time, but that is not picked up the trio. They gave the American a punch and a knife stabbed him in the chest.

The three then beat on the run, but two of them were soon arrested by the Central Station. One of them was found to have a bloody knife with him. The third suspect was later arrested during the night.