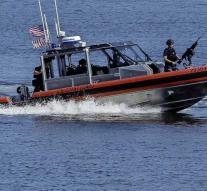 washington - A lieutenant of the US Coast Guard from the state of Maryland was arrested last week in Washington on suspicion of planning terrorist attacks. US media reports that.

The man, Christopher Paul Hasson, describes himself as a 'white nationalist'. He would target the leaders of the Democratic Party and American journalists. A large arsenal of weapons and drugs has been found at his home.