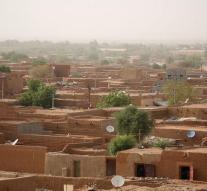 - Gunmen on Friday kidnapped in Niger, an American aid worker and transferred to Mali. This confirms the mayor of the city Abalak. 'First they came on motorcycles and they killed two guards. Then came an SUV that took the man to the border with Mali, 'said the mayor.

Kidnappings in Niger are a lot rarer than in neighboring Mali, where Islamist extremists often kidnap people for ransom or political demands. There has not been previously kidnapped a US citizen in Niger. Well tried to abduct suspected Islamic extremists embassy personnel from the United States in the city of Tahoua.

A spokesman for the US embassy reported that an investigation was launched, but would not confirm the incident.