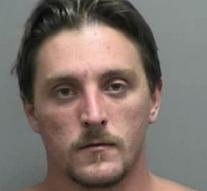 madison - An armed man who sent a threatening manifesto to President Donald Trump, after a manhunt and a half week arrested in Wisconsin. Joseph Jakubowski surrendered without resistance, according to local media.

The police had since April 4 with might and seeking Jakubowski. The man then raided a gun shop and then would have put his car on fire. According to a known Jakubowski he had already discussed the possibility of committing an attack.

Researchers were concerned about the ' anti-religious ideas '' in the 161-page manifesto. As a precaution, the police often took a look at local churches and other religious institutions.

Jakubowski was finally arrested after a report was received about a suspicious person hanging around at a farm near the village of Readstown. It turned out to be the fugitive American.