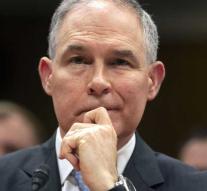 seattle - The federal appeals court in Seattle has instructed the American environmental agency EPA to ban the widely used insecticide chlorpyrifos. Two of the three judges were of the opinion that a decision by the then EPA boss Scott Pruitt should be reversed.

The Donald Trump appointed and dismissed Pruitt disregarded a petition from environmental protection organizations in March 2018 to blacklist the offending drug if it ends up in the food chain. Farmers like to use it to protect their fruit, vegetable and nut harvest.

'This shows that EPA can not just ignore the knowledge that this pesticide can damage the brains of children,' said Marisa Ordonia, the lawyer of the plaintiff. Chlorpyrifos is already heavily controversial. Pruitt allowed it anyway because he, like Trump, wanted to get rid of too much regulation.