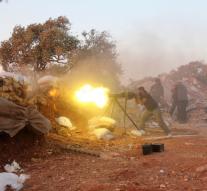 - The US Air Force has ammunition for small weapons parachuted into northern Syria, destined for the Syrian opposition. The dropping happened Sunday, said an anonymous source at Defence.

According to the source the dropping part of the revised strategy was representing the United States announced last week. Thus, the US wants to help the rebels who are fighting in Syria against Islamic State.