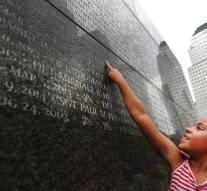 - "Two hijacked planes crashed into the towers of the World Trade Center in New York, a third into the Pentagon in Washington. Occupants of a fourth unit did worse to avoid, but had to pay with their lives when their plane crashed into a field in Pennsylvania. It's Sunday fifteen years since the terrorist movement al-Qaida, the United States shook to their foundations."

"The attacks cost nearly three thousand lives. At various places in the country, including of course New York and Washington, they are remembered. New York firefighters held Saturday already a service in St Patrick's Cathedral, not only for the 343 firefighters who perished on that fateful day, but also the 127 by related illnesses died in the following years."