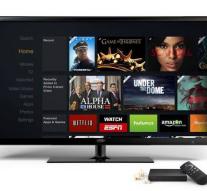 - Amazon makes its video streaming service available worldwide. Making it the biggest online store in the world will battle including Netflix, which has long been almost everywhere active in the world.

In a message on the new reality series The Grand Tour, with the star of BBC hit Top Gear, Amazon hinting at a further roll-out to a total ' two hundred countries and territories. 'The company has already spent billions on licenses for programs and the production of exclusive films and series such as the Grand Tour.

The video service is part of a broader plan by the online store, which offers, among other music, e-books and faster delivery of purchases. The idea behind this is that customers who watch videos on Amazon Prime, as the service is called, are more likely to make online purchases through the site.

Explicit statements about Amazon has not yet made an introduction of the video service to the Netherlands. However, there have been world-wide, depending on the count, but a small two hundred countries. In addition, RTL CEO Bert Habets said recently in an interview that the media company recently trumped by Amazon several times in the purchase of licenses for the Dutch market.

The company launched earlier a shop for e-books in the Netherlands. In addition, the German version of the online store was, where there is available a wider range for Dutch customers, recently expanded with Dutch translations.