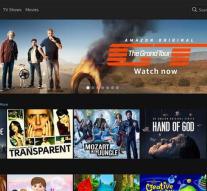 - Amazon Prime Video subscribers can now watch their movies and series on PlayStation 3 and 4. The app is now available for download via the PlayStation Store. Last December, streaming service was launched in more than 200 countries.

Prime Video members in the Netherlands have, in addition to a wide range of famous Hollywood series and movies, also exclusive access to Amazon programs such as The Tick, The Grand Tour (with Jeremy Clarkson, Richard Hammond and James May), The Man in the High Castle, Transparent, Mozart in the Jungle, American Gods and Goliath.

The service is available until the end of the year for an introductory price of € 2.99 per month and thereafter it costs € 5.99 each month.