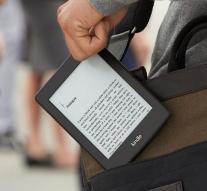 seattle - Amazon denies that a hacker stole data of 80,000 customers with a server Kindle. That reports The Register.

Recently, information was put on the Internet that appeared to come from a server from Amazon Kindle. These have included email addresses, hashed passwords, debugging and other information that would come from a hacked Amazon system.

'' We have established that this information comes from Amazon servers and that such accounts are not real accounts of customers of Amazon '', as has let the company know to The Register.