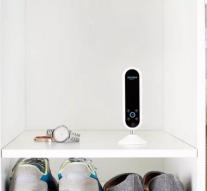 seattle - Amazon.com is going to give its customers clothing advice. The company has developed a camera that can be used with voice, the Echo Look, and a corresponding app that recommends clothing.

The Echo Look costs $ 199.99, converted 183 euros, but it's not widely available yet. He has a 5 megapixel camera that can shoot and shoot the user as a hands-free self-stick, as described by TechCrunch. The images can be viewed on the app on the smartphone. With the app, users can also scan garments, after which the Look outlines which trendier is and which more fits the figure.