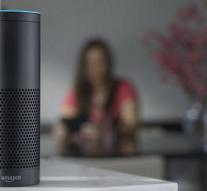 - "After more than two years, the Amazon Echo appears on the European market. The device allows users through virtual assistant Alexa can control a variety of devices and business can be ordered through Amazon, will be available later this month in Britain and Germany. Three weeks later, the Echo Dot, the little brother of the Echo, to those markets. Until now, to control the Echo and Echo Dot only in the United States."

"Due to the European launch, there are new companies that have announced an integration with Alexa. Sky Sports, Just Eat, Skyscanner and Uber belong to those companies."