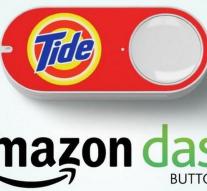 seattle - Amazon offers its Dash buttons now in Japan. That reports The Verge Monday. After the United States, the United Kingdom, Germany and Austria, Japan is the fifth country where the gadget is for sale.

The Dash button is a simple device that actually consists only of a button. With a pressure of an order at Amazon placed that button for the product you bought the button.

In Japan, the buttons for 42 different products available. These are American brands like Gillette razors and Ariel laundry detergent, but also Japanese products such as mineral water or Suntory cruesli of Calbee.