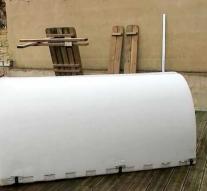 bordeaux - An inventor in Bordeaux has developed an 'isothermal igloo' where homeless people can seek shelter. French media reported Monday that the 'igloo' was designed and built by Geoffroy de Reynal. His structure is called 'iglou' and is 2 meters by 1.20 meters on the ground. It has a semi-circular roof.

The invention is made of aluminum and insulation foam. According to the 26-year-old engineer De Reynal, the igloo is able to maintain a temperature that is fifteen degrees higher than outside, if at least someone is in it.

With ten 'iglous' the invention has been tested in Bordeaux since December. And now that the 'Siberian' cold is also affecting France, it gets extra attention. Ten prototypes have been sent to Paris to be tried out in this ice cold week. Possibly the cold leads to an 'industrial production of the iglou', the engineer hopes.