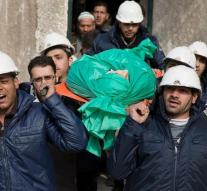 stockholm - For her efforts in the rescue of civilians in the Syrian civil war, the NGO White Helmets Thursday awarded the Right Livelihood Award, the \'Alternative Nobel Prize '.

Alternative Nobel Prizes awarded since 1980 to individuals or organizations that are ignored by the founder, the Swedish-German philanthropist Jakob von Uexkull, the 'normal' Nobel Prizes.