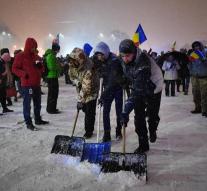 bucharest - Despite heavy snowfall, thousands of Romanians went back to the streets to protest against the government. It is already the ninth consecutive day that the country has been the scene of demonstrations. Now were back in capital Bucharest thousands of people on their feet. In other cities was demonstrated on a smaller scale.

The protesters demand that the government step down because it does too little to tackle corruption in the former Eastern bloc country.

The Government of Romania on Wednesday as expected survived a confidence vote. The vote on the motion comes just days after the government of Sorin Grindeanu under pressure from mass protests withdrew a controversial decree on corruption. The motion was filed because of that decree. Sunday counted Romanian media about half a million protesters in several places, the largest number since the fall of communism in 1989.