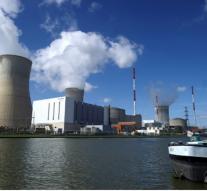 - "The Belgian reactor Tihange 2 was shut down Friday morning. That has notified operator Engie Electrabel. Tihange 1 was shut down Wednesday after it was damaged part of the building during construction."

"There is a fault in the steam generator in Tihange 2. The generator is located in,, the non-nuclear part \"of the plant. It is not known how long the repair will take. Tihange 2, since the reactor shell defects appeared to also exhibit known as the crack reactor \", this year has already been shut down several times. Tihange 1 is probably Sunday started again."