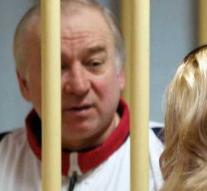 prague - The Russian ambassador in the Czech Republic has been asked about claims that the nerve gas that was used against a Russian double agent and his daughter in England would come from the Czech Republic. Sweden did the same thing on Monday for similar claims.

Britain accuses Moscow of having used the nerve gas novitsjok in poisoning Sergey Skripal and his daughter Yulia. Novichok was originally developed in the Soviet Union.

Moscow expressed his contempt for the allegations: it wants Britain to come up with evidence, or with excuses.

A spokesman for the Russian Foreign Ministry said Saturday that the most likely source of nerve gas was Britain itself, the Czech Republic, Slovakia, the United States or Sweden.