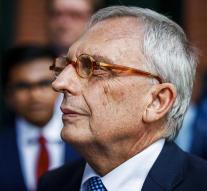 roermond - After the Public Prosecutor (OM) will now also former VVD politician Jos van Rey appeal against the conviction by the court in Rotterdam to 240 hours of community service.

That leaves From Wednesday Rey know through his lawyer Gitte Stevens.

Rey decided to appeal because even the public prosecutor is appealing. If the OM abandon the profession, will also Jos van Rey reconsider its decision, has announced his counselor.


The court ruled that Van Rey has bribed by his friend and developer Piet van Pol, who was previously sentenced to 100 hours community service. He also leaked a confidential committee and was found guilty of election fraud.

The prosecution had demanded two years in jail because of corruption, electoral fraud and money laundering. Stevens had called for his acquittal.